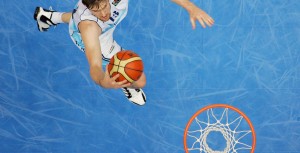 FOR TWO WEEKS in August and September, 24 national teams will take part in the FIBA World Championships hosted by Turkey, a country where the sport rivals soccer for attention and mindshare among its passionate fans. The tournament has helped reinforce basketball’s standing as a truly universal sport since 1950, but as we await the 16th edition even FIBA, basketball’s world governing body, admits it has yet to fully realise its commercial potential. FIBA’s broadcast rights were sold by the now defunct ISL until 2001, and only in the last eight years, with a strong in-house team, has there been a co-ordinated strategy for the sale of its broadcast and marketing rights. The result is a far healthier product and commercial proposition than ever before. According to FIBA, the most recent cycle of World Championship, Continental Championships and Olympic competitions has seen an unprecedented growth in both the quality and awareness of international basketball. This year, says FIBA commercial director Matthew Osmon, the World Championships will be taken live or as highlights in 180 countries – comparable to the FIFA World Cup – and will be viewed by an accumulated audience of around one billion, up on the 800 million people which FIBA says watched the 2006 edition in Japan. “We are experiencing strong growth in TV audiences and we are seeing a more than steady growth in our income,” Osmon tells SportBusiness International. “We have done extensive research relating to awareness – and interest in our major competitions is now very strong. In some markets like Spain, the World Championships are the must-see event ahead of the Olympic Games and NBA finals.”