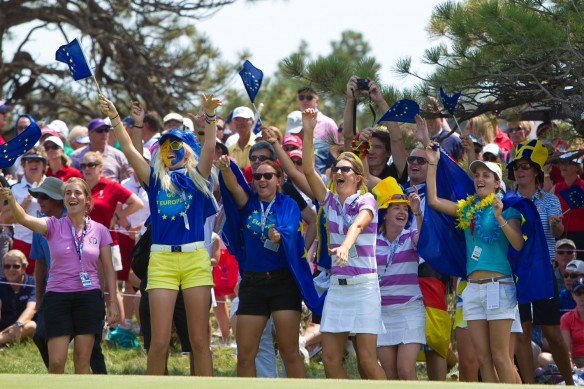 BUCKINGHAMSHIRE, UK, Thursday, October 9, 2014 – The Ladies European Tour (LET) will be launching the assignment process for The 2019 Solheim Cup later this month with the support of the Switzerland and London based consultancy JUMP.

The 2019 Solheim Cup assignment process will begin in late October with a formal invitation to bidders and will conclude in early 2016 with the announcement of the 2019 Host.

Several countries have already indicated their interest in hosting one of the most followed women’s sports events in the world.
The LET has been working with the strategic consultancy JUMP since 2013 to develop its new strategy and guide its execution as well as the acquisition of new sponsors.

LET CEO Ivan Khodabakhsh said: “The recent Ryder Cup has demonstrated the growing appetite to watch Europe take on the USA at golf. With the European team’s victory at the past two editions of The Solheim Cup and the growth in women’s golf across the world, The Solheim Cup is developing into a unique women’s sport brand globally. We are therefore very confident of a strong host for The 2019 Solheim Cup.”

JUMP CEO Matthew Osmon commented: “Women’s golf in general and The Solheim Cup in particular have enormous unrealised commercial potential. The players are outstanding athletes who are smart and articulate, but at the same time remain approachable and very willing to work with corporate partners. The Solheim Cup, like its male equivalent, The Ryder Cup, is the ultimate property in women’s golf and offers and original and attractive proposition for sponsors.”

About the Ladies European Tour:

The Ladies European Tour is a company limited by guarantee, not having a share capital, and its objectives are to promote world-wide interest in the game of golf, to maintain high standards in the promotion, development and conduct of ladies’ professional golf activities, to provide opportunities in tournament play and golf promotion for lady golf professionals, to co-operate with organisations engaged in golf promotion whose objectives are compatible with those of the Ladies European Tour and to protect and further the mutual interest of the Tour and its Members.

Formed as the WPGA in 1978, the first series of golf tournaments took place in Great Britain in 1979. Now in its 36th year, in 2014 the Ladies European Tour features 24 tournaments in 18 different countries globally.

With a strong base in Europe, the LET has in recent years expanded into new territories such as Dubai, India, New Zealand, South Africa, Turkey and China. In 2014, the international schedule began in New Zealand and concludes in Dubai, United Arab Emirates.

About The Solheim Cup

The Solheim Cup combines the tradition and prestige of the game of golf with passion for one’s country. This biennial, trans-Atlantic team match-play competition features the best U.S.-born players from the Ladies Professional Golf Association (LPGA) Tour and the best European members from the Ladies European Tour (LET).

The Solheim Cup is named in honor of Karsten Solheim, the founder of Karsten Manufacturing Corporation, which makes PING golf equipment. In 1990, the Solheim family, in conjunction with the LPGA and the LET, developed the concept and became the sponsor for The Solheim Cup, professional golf’s international match-play competition for women. Held every two years, the event has grown into the most prestigious international women’s professional golf team event. The Solheim Cup is the most highly coveted trophy in women’s professional golf team competition; some of the most memorable moments in women’s golf have happened during Solheim Cups, and berths on the U.S. and European teams are highly coveted by players from both organisations.

The 2015 Solheim Cup will take place at Golf Course St. Leon-Rot in Germany. The European Team enters the competition holding the Cup and will need 14 points to retain it, with the U.S. Team needing 14½ points to regain the coveted Waterford Crystal prize. The U.S. squad holds an 8-5 lead in the series, which began in 1990.